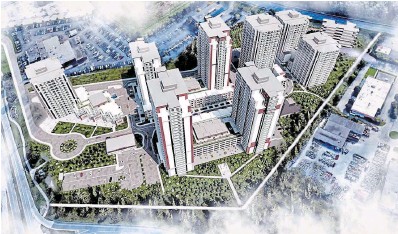 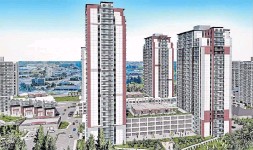 A future very different from the disco-driven 1970s may soon reach a prime site in north Waterloo. Politicians and the public got their first look Monday at a proposal to replace the Inn of Waterloo with a major development of eight residential highrises and two office towers. It was 1972 when the Waterloo Motor Inn opened at 475 King St. N. Back then it was a remote location beside a new expressway. Today the site is considered a gateway to the city, close to neighbourhoods, shopping, schools and transit. In 1978 the motor hotel opened a disco, among the first in the region, eventually named Ruby’s. It went on to add many more rooms and a pool and other facilities. It changed its name to the Waterloo Inn and more recently to the Inn of Waterloo after changing ownership. Over the years it became a go-to place for political events, galas, dining, Christmas parties and New Year’s celebrations. More recently it was used to house unsheltered people. “Waterloo Inn has always been an iconic site for me,” said Pierre Chauvin, a planning consultant for developer Drewlo Holdings. But Waterloo’s needs are changing. The high-priced city faces a housing crisis. The site is large and largely vacant. If city council bends its planning rules, and if Drewlo can move its proposal to construction, the future of the site will be taller and packed with tenants. This is how Waterloo is changing as it replaces homeowners with renters and leads the region in growing up rather than out. “It’s a gateway to the city. And we’re proposing this residential development, because there’s a shortage of residential units. So we’re basically meeting that need,” said George Bikas, senior land development manager with Drewlo. Drewlo’s proposal calls for eight residential towers of 16 to 28 storeys containing 1,682 apartments plus 96 townhouse-style units. All are proposed as rental housing. There would be two six-storey office buildings on Weber Street North and a one-storey commercial building fronting on King Street. “It’s a community of its own,” Bikas said. “It’s going to be one of our largest and best developments, a signature piece.” Chauvin said “it’s pretty crazy at this time of COVID” to propose office space because offices are going unused in the pandemic. He said the proposal aims for a place where people can live, work and play. Council approval is needed to permit housing on the site, to permit extra height, and to tweak provisions around setbacks and building footprints. Council will vote on the proposal later after more public and planning review. If approved and financed, completion could take until 2032 or longer, proceeding in six phases and starting with office buildings. “We’d like to move as fast as possible,” Bikas said. Councillors raised a number of questions Monday. Does the housing project really need 2,500 parking spaces? What’s the potential for flooding? How will it fit in with nearby neighbourhoods and with redevelopments proposed nearby? How is city hall assessing the urban design? Coun. Diane Freeman worries about air quality for residents who would live beside Highway 85. “I can envision people having concerns down the road,” she said. Dev Handa, who lives 100 metres away, asked if new housing will aggravate neighbourhood traffic headaches on Weber Street North. He asked what kind of community benefits city hall might secure in exchange for approving extra height. “It’s a nice-looking site plan,” Handa told the developer. Family-owned Drewlo, based in London, Ont., has built and manages rental apartments in Kitchener and in five southwestern Ontario cities. It has a block-sized apartment redevelopment under construction at King Street East and Madison Avenue in Kitchener.