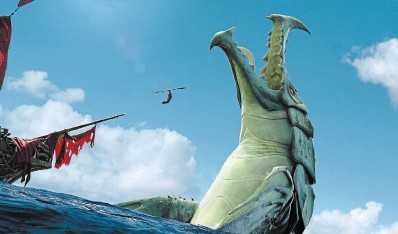 After taking the biggest risk of his professional career, Chris Williams — the Kitchener-raised animator who won an Oscar for directing the Disney blockbuster “Big Hero 6” — will find himself back on the red carpet March 12 after his Netflix flick “The Sea Beast” was nominated for Best Animated Feature on Tuesday. “It’s such a blur,” says the softspoken director, whose earliest movie memory is riding his bike to Kitchener’s Lyric Theatre in the rain to see Arnold Schwarzenegger in “The Terminator.” “It happened so early (Tuesday) morning. I woke up and got a message from someone nominated in the Best Animated Short category who texted, ‘See you at the Oscars!’ And then I checked my phone and computer and had a zillion messages.” He laughs. “I’m still processing and trying to make sense of it. The first person I thought of was my mom. She’s such a huge fan of the Oscars.” It’s vindication for the 54-year-old filmmaker, who wrote, produced and directed this sprawling seafaring epic over three and a half years — mostly during the pandemic — after leaving a lucrative gig at Disney for the upstart streaming service Netflix. “It does feel a little different this time around,” he confides, “because I left the creative home where I’d been for 25 years and made this movie a little outside of what people expect from North American feature animation. “It feels special, especially because this was an incredible year for animation, with so many great films that were nominated.” The quietly ambitious filmmaker — whose Canadian roots are often overlooked because he lives in the U.S. — attended Waterloo’s Bluevale Collegiate in the ’80s and studied fine arts at the University of Waterloo before enrolling in the animation program at Oakville’s Sheridan College, where he was snapped up by Disney recruiters and drafted stateside before he even graduated. Landing his first Oscar nomination (Best Animated Feature) for 2008’s delusional doggie epic “Bolt,” he won the same award in 2014 for “Big Hero 6” and shared a co-directing credit on the Oscarnominated “Moana” in 2016. But in Hollywood, as in life, it’s the present that counts. And “The Sea Beast” — with its edgy tonal shifts and unconventional storyline — was risky. “There are absolutely no guarantees when it comes to making films,” insists Williams, whose project was inspired by his love for action epics like “King Kong,” “Raiders of the Lost Ark” and “Lawrence of Arabia,” “where there’s a sense of leaving the known world and heading into the unknown with a real sense of peril, danger and high stakes.” “There’s an alchemy to it. Even with really talented people working under the best of circumstances, there’s no guarantee it’s going to come together. “There’s always an emotional and creative risk.” Having said this, you don’t get nominated for four Oscars (including “Moana”) — and win one — by accident. While he’s too self-effacing to say so, Williams — who honed his craft drawing comic books during art classes at Bluevale Collegiate — is a master of his craft. “Maybe ‘relieved’ is a better word than ‘surprised’ that it connected the way it did,” he says of his tale about a legendary sea monster hunter whose life turns upside down when a young girl stows away on his ship. “We have these big action set pieces and spectacle. But really the story is about these two main characters and there’s a sweetness and delicate quality to their relationship. “Ultimately that’s what people will respond to, that sense of an emotional centre.” Despite work-from-home pandemic challenges that, at one point, found Williams directing a voice actor on his laptop while noise blared through the walls from a neighbour’s renovation, it all worked out in the end. “Sea Beast” — promoted as “the must-watch family movie of the summer” — became Netflix’s most successful animated film of all time, with 165 million hours viewed, and sparked a sequel also being helmed by Williams. And landing in the Oscar pool, win or lose, will put Netflix and keep Williams — without benefit of the Disney safety net — on the animation A-list. “It’s ultimately a credit to the hundreds of people who joined me on this journey,” says the filmmaker, who presided over a massive team of animators, voice actors, lighting techs and effects artists. “It was a really ambitious movie made under very difficult circumstances.” If he’s lucky, he may even wrangle a better parking spot from Netflix. “The parking situation is very egalitarian,” he laughs. “But I’ll propose that: special parking just for Oscar nominees.” “The Sea Beast” is nominated for Best Animated Feature along with “Guillermo del Toro’s Pinocchio,” “Marcel the Shell With Shoes On,” “Puss in Boots: The Last Wish” and “Turning Red,” directed by fellow Canadian Domee Shi. The 95th Academy Awards take place March 12 in Hollywood.