Liberals prepare for ‘turbulent’ economy over next 12 months 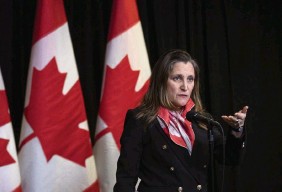 Canada’s economy is facing a “turbulent” year, but the federal government still has some spending room for big priorities including a new health-care deal with the provinces, Associate Finance Minister Randy Boissonnault said Tuesday. Boissonnault’s remarks came as the federal Liberal cabinet was meeting on the second day of a three-day retreat in Hamilton, where the economy and the next federal budget were high on the agenda. Finance Minister Chrystia Freeland delivered an economic update to the cabinet Tuesday, and economists and Canada’s chief statistician also briefed the ministers on the situation facing Canada and the world. That came the day after a joint report from the Business Council of Canada and Bennett Jones warned that the fiscal forecast laid out in the last federal budget and the fall economic statement was likely too rosy. The report, written by former Bank of Canada governor David Dodge and former Liberal finance policy adviser Robert Asselin, said the government’s forecast was based on a “plausible but optimistic” set of economic and interestrate assumptions. They warn that there is a “high likelihood of a more severe recession” this year, and that the Liberal promises on everything from health-care funding and enhanced national defence spending to infrastructure improvements and climate change are going to cost a lot more than was projected. Boissonnault said the report is one of many the government will look to as it makes its economic forecast ahead of the next budget. He said he thinks the fiscal reality will fall somewhere between the best- and worst-case scenarios laid out in the fall economic statement. “There’s lots of uncertainty,” Boissonnault said. “So we’re going to be watching this every step of the way as we get ready for budget (2023). We still have fiscal room to be able to do the things we need to do, but the fiscal room has tightened.” Freeland said it’s not clear yet how the COVID-19 recession will “finally play out,” and the reopening of China following years of pandemic closures is also a bit of an unknown. “That means we do need to continue to take a fiscally prudent approach,” she said. At the same time, Freeland said health care and the green economic transition are “real fiscal pressures” that the government has to address. She said Canadians are looking to governments to solve health-care woes, and the green transition is something Canada can’t push off, because if it doesn’t move now, it will miss the chance. Ongoing talks with the provinces for a new health funding deal have made some progress in recent days, though a conclusion to those talks does not appear imminent. The provinces have asked for billions over the next decade to bring their health systems back from the brink of collapse. Ottawa is insisting on accountability for any new health funding, and Trudeau has not publicly committed to meet the premiers’ demands. Kevin Milligan, a University of British Columbia economist who was among those asked to brief the cabinet Tuesday, said it is unlikely that any new health deal would include a lot of up-front funding, so it is unlikely to put pressure on the government’s spending immediately. Both he and Carolyn Wilkins, a former deputy governor at the Bank of Canada and now an economics research scholar at Princeton University, said the government needs to be careful that whatever it does doesn’t nudge interest rates up even further. Canadians are so heavily in debt that every interest rate hike now has a bigger impact on the economy and on individuals than it would have in the past.