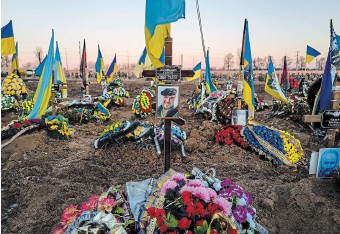 Several senior Ukrainian officials, including frontline governors, lost their jobs Tuesday in a corruption scandal plaguing President Volodymyr Zelenskyy’s government as it grapples with the nearly 11-month-old Russian invasion. Ukraine’s biggest government shakeup since the war began came as U.S. officials said Washington was poised to approve supplying Kyiv with M1 Abrams tanks, with international reluctance eroding toward sending tanks to the battlefront against the Russians. Zelenskyy was elected in 2019 on an anti-establishment and anticorruption platform in a country long gripped by graft, and the new allegations come as western allies are channeling billions of dollars to help Kyiv fight against Moscow. Officials in several countries, including the United States, have demanded more accountability for the aid, given Ukraine’s rampant corruption. While Zelenskyy and his aides portray the resignations and firings as proof of their efforts to crack down, the wartime scandal could play into Moscow’s political attacks on the leadership in Kyiv. Serhii Bochkarev, a 28-year-old translator, welcomed the moves. “Corruption during war is totally unacceptable because people are giving their lives to fight Russians and to defend the motherland,” he said. The shakeup even touched Zelenskyy’s office. Its deputy head, Kyrylo Tymoshenko, prominent for his frequent battlefield updates, quit as the president pledged to address allegations of graft that embarrassed authorities and could slow Ukraine’s efforts to join the European Union and NATO. Tymoshenko asked to be relieved of his duties, according to an online decree signed by Zelenskyy and Tymoshenko’s own social media posts. Neither cited a reason for the resignation. Deputy Defense Minister Viacheslav Shapovalov also resigned, local media reported, alleging his departure was linked to a scandal involving the purchase of food for Ukraine’s armed forces. Deputy Prosecutor General Oleksiy Symonenko also quit. In all, four deputy ministers and five governors of front-line provinces were set to leave their posts, the country’s cabinet secretary said on the Telegram messaging app. Authorities did not announce any criminal charges. There was no immediate explanation. The departures thinned government ranks already diminished by the deaths of the interior minister, who oversaw Ukraine’s police and emergency services, and others in the ministry’s leadership in a helicopter crash last week.