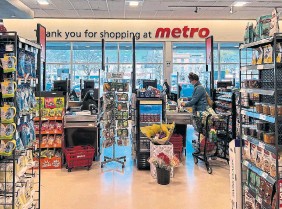 Metro Inc., the first of Canada’s big three grocers to release earnings this year, reported Tuesday a double-digit increase in profit and a 10 per cent dividend hike following a period that saw food prices rise at the fastest pace in decades. Grocers have come under intense scrutiny in recent months for posting strong profits as many Canadians struggle with higher food costs. Metro said higher costs are being passed through the supply chain from food manufacturers, wholesalers, processors and producers. “In 2022, Metro received more than 27,000 price increases averaging more than 10 per cent from suppliers for dry groceries alone — nearly three times the annual average,” Metro CEO Eric La Flèche said during an annual meeting of shareholders on Tuesday. “This high inflation over the past several months is difficult for everyone to accept, but it is a global reality (and) Canada is faring better than most countries.” Critics have accused grocers of profiteering at a time of spiralling inflation, but companies have repeatedly said their profit margins on food remain stable. In fact, La Flèche said Metro is “absorbing some of the (price) increases as our gross food margins are decreasing.” Yet researchers have said a lack of transparency in the financial results of grocers makes it difficult to determine profit margins on food because companies lump different retail segments — such as food, pharmacy and general merchandise — together. Items such as cosmetics, over-the-counter drugs and apparel are thought to have higher gross profit margins. Metro, which operates both supermarkets and drugstores, reported net income of $231.1 million in its first quarter, up 11.3 per cent from $207.7 million in the same quarter a year ago. The profit amounted to 97 cents per diluted share for the 12-weeks ended Dec. 17, up from 85 cents per diluted share a year earlier, prompting the company to raise its quarterly dividend to 30.25 cents per share, up from 27.5 cents per share. On an adjusted basis, Metro said it earned $1.00 per diluted share, up from an adjusted profit of 88 cents per diluted share a year earlier. Metro’s sales in the quarter totalled $4.67 billion, up 8.2 per cent from nearly $4.32 billion a year ago. But La Flèche said the increase was “mainly due to higher inflation this quarter.” Food same-store sales rose 7.5 per cent compared with a year ago. Meanwhile, news reports have suggested grocery store theft is on the rise across Canada as the cost of food soars. “Any time there’s high inflation or rapid inflation like we’ve seen, you do see some increases in theft,” La Flèche said. Metro’s top executives received a hearty pay bump in 2022, with the company’s top five executives sharing $13.2 million in compensation for fiscal 2022 — about four per cent higher than the year before, according to regulatory documents. Their annual bonus increases were even more generous: the execs shared $3.7 million in annual bonuses, a 13.7 per cent increase over last year.