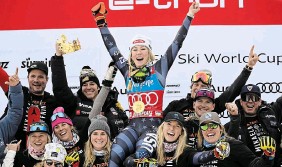 Alpine skier Mikaela Shiffrin detests the label GOAT — greatest of all time — when it’s mentioned during debates over athletes’ accomplishments. “It’s mostly because the first image that pops up in my head is an actual goat. Like the screaming goat on Instagram,” she said of a popular video that was remixed to the song “I Knew You Were Trouble,” by Taylor Swift. “Also, the terminology ‘breaking records,’ I don’t like that either,” Shiffrin said in an interview recorded by the U.S. Ski and Snowboard team. “‘Resetting records’ is what I like. What other athletes have done before you is not something that can be broken.” After resetting the women’s World Cup victory record Tuesday in Italy, Shiffrin will have to become accustomed to being called the GOAT. Because she is. The 27-year-old Colorado native continued her stunning rebound from a baffling 0-for-5 individual performance at the Beijing Olympics and 0-for-6 total effort that she said left her feeling like “a joke.” She earned her 83rd career World Cup triumph by winning a giant slalom race at Kronplatz in South Tyrol, Italy. Shiffrin led from start to finish at the Kronplatz resort in the Italian Dolomites, crossing 0.45 seconds ahead of world champion Lara GutBehrami and 1.43 ahead of home favourite and former overall champion Federica Brignone after also posting the fastest first run. Shiffrin said switching from speed events to technical races gave her confidence on Tuesday. “Coming here, the number 83 was almost completely out of my mind today,” she said. “It was like we’re just resetting the season from Square One. It’s very fitting that it would come in the moment when I’m thinking about it the least and don’t expect it at all.” Shiffrin passed fellow American Lindsey Vonn for the most World Cup wins by a woman. Swedish great Ingemar Stenmark holds the overall record of 86. “I don’t think there are words to explain all the feelings,” Shiffrin said after her record-setting win. “In the end of it, it’s like there’s too much excitement to feel. I don’t know if that makes sense. So it’s something you can’t explain. So I just try to breathe a bit and enjoy it.” Shiffrin said her admiration for Stenmark wouldn’t change even if she passes his record. “His name is in history as a legend of the sport that people will remember forever,” she told reporters. “Maybe they’ll remember him longer than they’ll remember me. We’re all still talking about him. That’s a pretty incredible mark to leave on the sport.” As skiers, Vonn and Shiffrin are a study in contrast: Vonn was a daredevil, a speed demon, often crashing wildly into fences. She thrived in the speed events — the downhill and super-G. Shiffrin’s impeccable technique allows her to excel in the technical races, the slalom and giant slalom, but she’s swift and versatile enough to be the only skier to have won a race in all six World Cup disciplines — the downhill, super-G, slalom, giant slalom, combined, and parallel slalom. Shiffrin matched Vonn’s 82 wins on Jan. 8 by triumphing in a giant slalom in Kranjska Gora, Slovenia, the 233rd World Cup race of her career. Vonn needed 395 races to reach that mark. Shiffrin finished second in a slalom on Jan. 10 in Austria in her first attempt to pass Vonn. “I knew from the very beginning that she would be the one to break all the records. But to do it at such a young age is really impressive,” Vonn said in a diary she wrote for The Associated Press. After Shiffrin tied Vonn’s win total she screamed for joy, releasing the pent-up nerves that she said had ignited a rash on her face. But she later cried on the victory stand because it triggered memories of her father, Jeff, who died as the result of head injuries he suffered in a fall in Colorado in February 2020. Jeff Shiffrin, 65, was an anesthesiologist by trade and a photographer by hobby, known for snapping photos of his daughter on the World Cup trail. His death initially plunged her into a depression. She considered quitting. “There was a really long time that I didn’t really feel like it was worth it to care about anything,” she said in a 2021 interview on the “Today” show, “so it seemed like I’m not going to ski race again because the most fundamental thing of an athlete is that you have to care about your sport and you have do care about doing well at your sport, and I just didn’t.” She slowly regained her passion. Winner of Olympic gold in the slalom in 2014 and gold in the giant slalom and silver in the combined in 2018, she went to the Beijing Games with great expectations. For reasons she still can’t explain, she skied out on the first run of the giant slalom and slalom races, finished ninth in the Super-G, 18th in the downhill, and clipped a gate and crashed out early in the slalom portion of the combined event. In the mixed team parallel event she was part of a fourth-place finish for the U.S. “There’s going to be a whole chaotic mess of crap that people are saying about how I just fantastically failed these last couple of weeks in the moments that actually counted,” she said after the combined event. “It’s really strange, but I’m not even afraid of that right now and maybe it’s because I don’t have any emotional energy to give anymore.” Yet she found the motivation to return to the World Cup circuit after the Games and win her fourth overall title. She’s leading this year, too. Shiffrin refused to be defined by her Olympic failures. She got back up, stronger than ever. GOATS do that.