Rahm’s big run puts everyone on PGA Tour on notice 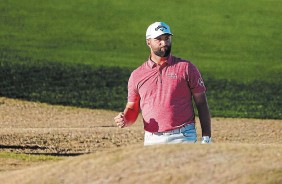 Davis Thompson, a 23-year-old PGA Tour rookie and former No. 1 amateur, needed only five words to indicate the odds he faced in the final round of The American Express. “I’m playing against Jon Rahm.” This isn’t the first time Rahm has been regarded as among golf’s best. He spent the second half of 2021 at No. 1 in the world, the same year he captured the U.S. Open at Torrey Pines for his first major. Rahm also is not the only player to go on the kind of heater he is on now. The 28-year-old Spaniard has won four of his last six starts worldwide over the past three months, including his two PGA Tour events this month on courses — Maui mountain, California desert — that couldn’t be more different. He won in Spain by six shots and the DP World Tour Championship by two in the fall. He started the new year on the PGA Tour by closing with a 63 to overcome a sevenshot deficit against Collin Morikawa at Kapalua, and then holding off a spirited challenge from Thompson in The American Express. Next up is the Farmers Insurance Open at Torrey Pines, one of his favourite places even before he won the U.S. Open. Rahm won his first PGA Tour event at Torrey in 2017, and twice in the past three years he has missed a playoff by one shot. Thompson’s words might ring true for the other 155 players in the field this week: “I’m playing against Jon Rahm.” “In my mind, I feel like I can get a lot better,” Rahm said Sunday. His average score in both PGA Tour starts this year is 65.75. “It’s my job to try to do the best I can, and so far, I’m doing a pretty good job.” It’s one thing to go on a big run. What really makes other players take notice is when it happens again and again. David Duval first made people take notice at the end of 1997 when he won his final three tournaments. And while he didn’t exactly fall off the map — Duval won a tournament in the winter, spring, summer and fall the next year — his start to 1999 was eye-popping. He won at Kapalua by eight. Then, he shot 59 to win the Bob Hope Classic. He was looked upon as the best player in golf, except the No. 1 ranking belonged to Tiger Woods. That eventually went to Duval two months later when he won The Players Championship. Vijay Singh already had two majors and a PGA Tour money title. And then he looked unbeatable in 2004. There was a feeling if his name wasn’t on the leaderboard, it would be the next time anyone looked. He won nine times — three in a row in September, the first of which made him No. 1 in the world and ended the five-year reign of Woods. Rory McIlroy, who currently occupies No. 1, also was an established star when he had a monster year in 2012, winning five times, including his second major. He twice had streaks of five straight top 10s. So no one was surprised when he won three straight times in 2014, two of them majors. Woods, of course, resides in his own section of golf history. Rahm is sure to be a heavy favourite at Torrey Pines, which starts Wednesday. He will try to become the first player since Dustin Johnson in 2017 to win three straight (Rahm was runner-up in Johnson’s third win that year at Match Play).